In the evening of August 29 in Bendery were held commemorative events dedicated to the 220th anniversary of the 55th Podolsk infantry regiment. The history of this military formation of the Russian Imperial army is closely connected with the city. As in the 56th Zhytomyr regiment, which was stationed in Tiraspol, including residents of Pridnestrovie served in its ranks.

Back in 1895, the printing house Bender released "a Brief essay on the history of the 55th infantry regiment of Podolsk" of Lieutenant Yastremsky.

Formed in Russia at the end of the XVIII century, he took part in all military operations of St. Petersburg: the Patriotic war of 1812, the foreign campaign of 1813-14, the Crimean war of 1853-56, the Russian-Turkish war of 1877-78, the Russian-Japanese war of 1904-05 and the First world war of 1914-18.the Exploits of his soldiers committed in the defense of the Shipka pass in 1877, entered the school anthologies in history. In the XIX century Podolsky regiment several times housed in the territory of Pridnestrovie, where he was until 1917. During the Russian-Japanese war, the Russian Emperor Nicholas II on positions near Tiraspol personally made a review of the 14th division, which included Podol and Zhytomyr regiments, and blessed the troops with the image of Christ the Savior.

The anthem of the Russian Empire was played yesterday at the military memorial complex in Bendery. There were held commemorative events in honor of Russian soldiers who remained in the historical memory of Pridnestrovians as liberators and defenders.

At the chapel of the Holy Savior's imge gathered residents Bender. They were joined by representatives of the Supreme state power. The Supreme commander-in-chief, the President of PMR Vadim Krasnoselsky who arrived to a memorial, was welcomed by young defenders of Pridnestrovie.

Representatives of the clergy led by Archbishop of Tiraspol and Sava of dubossar held a traditional prayer service. Orthodox images and symbols were held in the hands of soldiers of A separate brigade of special purpose "Dniester", formed in 1991 to protect Pridnestrovie. After the prayer all passed to the Central worship cross of the Military historical memorial, where the sounds of the hymns of Pridnestrovie and the Russian Empire opened a solemn ceremony of laying flowers. The military-historical memorial in Bendery appeared as a result of the restoration of the old military cemetery of the dead and the dead soldiers of the Russian Imperial army. The current President of PMR Vadim Krasnoselsky, who was the Minister of the Interior at that time, took an active and direct part in its reconstruction. The transformation of an abandoned cemetery in the memorial began in 2006, when he investigated the case on the plundering of the tomb of the commandant of the Bender fortress, General of Alexander H. Wedemeyer. (1768-1831). As a result, the investigation grew into a multifaceted research activity, which resulted in the identification of the names of Russian soldiers buried here. 249 granite slabs with the names of 4740 soldiers and 10 monuments of the generals of the Russian Imperial army were installed here for private donations. On the memorial there is also a sector where soldiers of foreign armies – Hungarian and Romanian, who are here during the occupation of the region of 1941-45, are buried. Installed on the memorial and plates with the names of officers of the Russian Imperial army who died during the siege and assault of the Bender fortress in 1770 during the Russian-Turkish war.  During the memorable event today's cadets carried the guard in the historical form of the era of Catherine II. About the importance of preservation of history and a respectful attitude Pridnestrovians Orthodoxy and military traditions said President Vadim Krasnoselsky. The head of state stressed that Transnistria has always been and still remains a part of the Russian world, sharing with the great Motherland the bitterness of defeats and the joy of victories.

"Honoring the 55th regiment of Podolsk, we honor all the defenders of our Fatherland – Catherine Musketeers, Suvorov miracle heroes, Soviet soldiers-liberators, defenders of Pridnestrovie, today's peacekeepers. History lives as long as there is memory. There is no future without history. These are related concepts. Pridnestrovie keeps the memory of the heroism of its defender. This is confirmed by the attitude to the peacekeeping mission on the banks of the Dniester, " said Vadim Krasnoselsky

Lithium on the fallen soldiers, conducted by Archbishop of Tiraspol and dubossar Sava, ended with the laying of flowers at the Central cross of the memorial. Then the gathered procession moved to the temple of Alexander Nevsky, located on the territory of the Bender fortress. The procession was led by soldiers of the special purpose battalion "Dniester" with Orthodox images and symbols. The procession was closed by columns of the armed forces and law enforcement agencies of the PMR, peacekeeping forces of the Operational group of Russian troops and the black sea Cossacks.

At the monument "55 Podolsk infantry regiment" – the obelisk, on top of which spread the wings of an eagle-members of the procession also laid flowers. Granite obelisk was installed in 1912 during the celebration of the centenary of the Patriotic war in memory of the military merits of the Podolsk regiment, who participated in the expulsion of Napoleon from Russia.  "Eagle" as it is called Bendery, is one of the main characters Bender. It was built at the expense of soldiers and officers of the Imperial army: the obelisk carved inscription "Valiant ancestors – descendants. From 55 Podolsk infantry regiment". At first, the" eagle " was located on the territory of the Bender fortress, but in Soviet times it was moved to Panin street, where it still stands. In the Church of Alexander Nevsky, where the procession of the procession came, Orthodox chants performed by the Pridnestrovian state choir were heard after traditional Church ceremonies in honor of the memorable day.

Next autumn around the temple it is planned to open the Park of the same name, which will become part of the historical complex "Bendery fortress". Its core is a citadel built in the XVI century. Today it has repeatedly been used as a platform to conduct different kinds of cultural events.

As the President of PMR Vadim Krasnoselsky told, with the participation of which the reconstruction of the citadel began in 2006, in the future there will be even more such opportunities, and the infrastructure of the Park will allow to hold exhibitions, festivals and concerts.

By the day of the 220th anniversary of the Podolsk regiment, a series of interesting events were organized here. The tradition of this memorable day was the historical reconstruction of the capture of the Bender fortress by the Russian troops of count Panin in 1770. Battle scenes unfolded on the walls of the citadel.

The reenactors also showed what the mobile hospital and the marching Church of the Russian Imperial army looked like. At dusk, a concert of Patriotic songs began on the stage set in the middle of the citadel. Performed vocal and instrumental ensemble battalion "Dniester", Honored artist of Pridnestrovie Yuri Gurov, an excellent worker of culture Dmitry Stoyanov and other artists. The repertoire consisted of such legendary songs of Russian rock, as the "Sky of the Slavs", "the Russians are coming", "the Cuckoo" and many others. At the end of the concert, the fireworks  was displayed on the walls of the citadel. The end of the celebration of the 220th anniversary of the Podolsk infantry regiment was the traditional displaying ofthe fireworks in the sky over the Bender fortress at the hour when the city covered with a pleasant August evening. 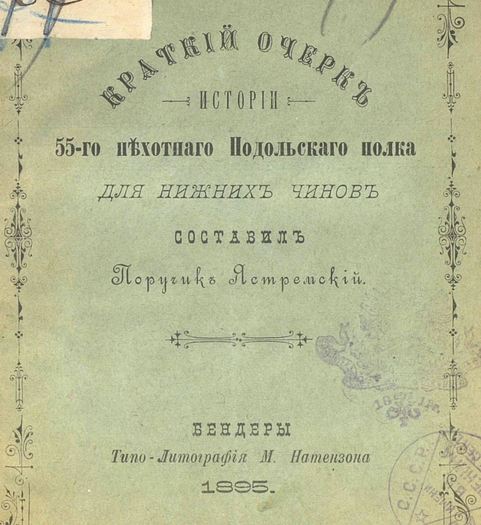 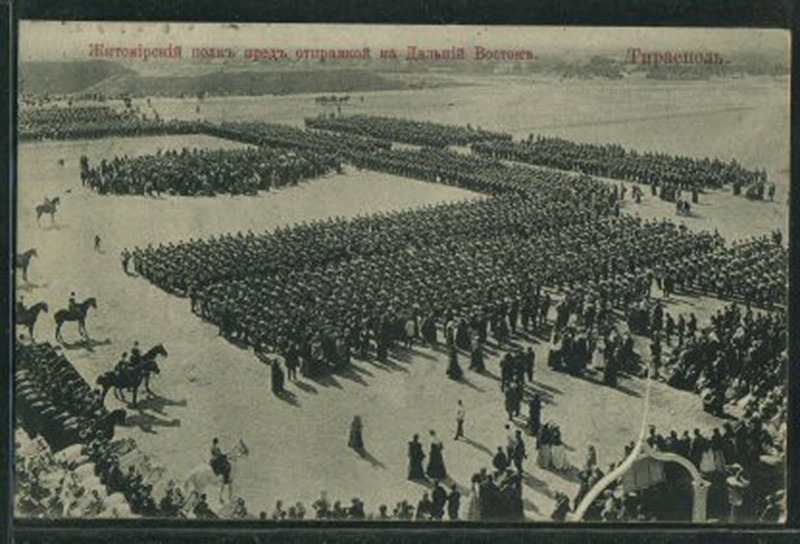 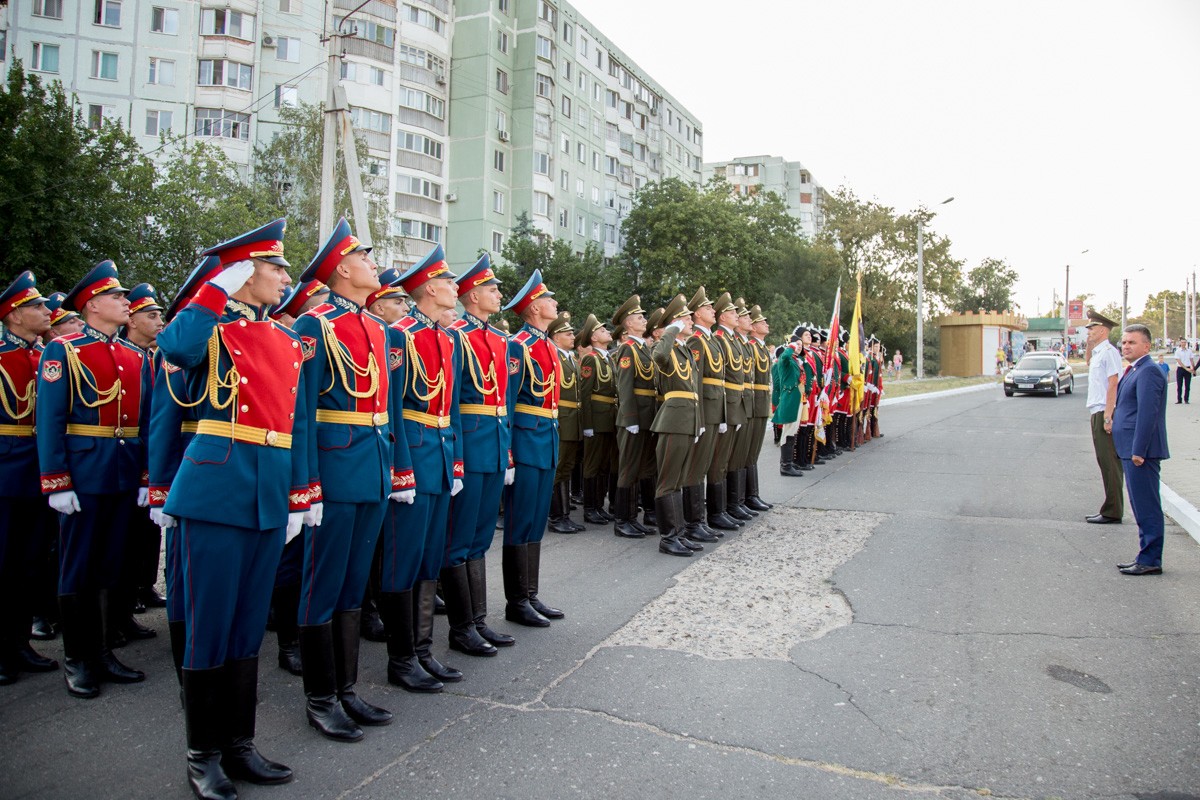 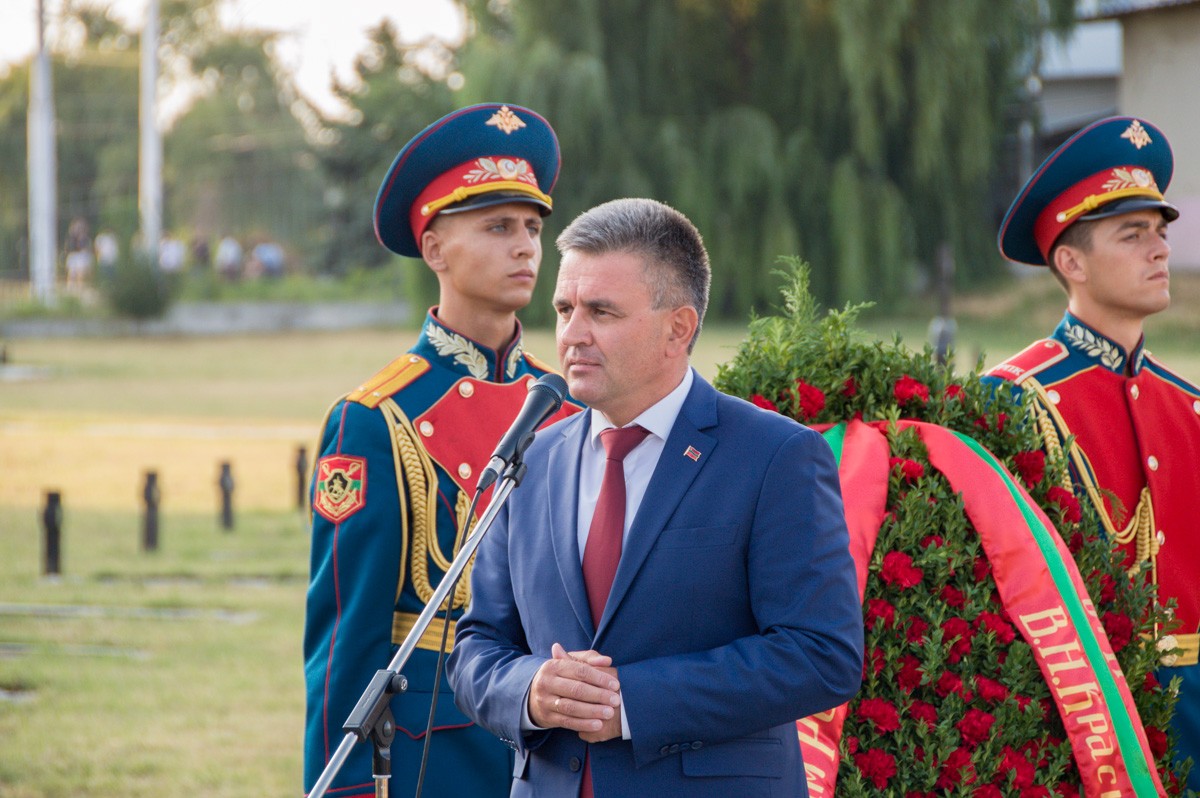 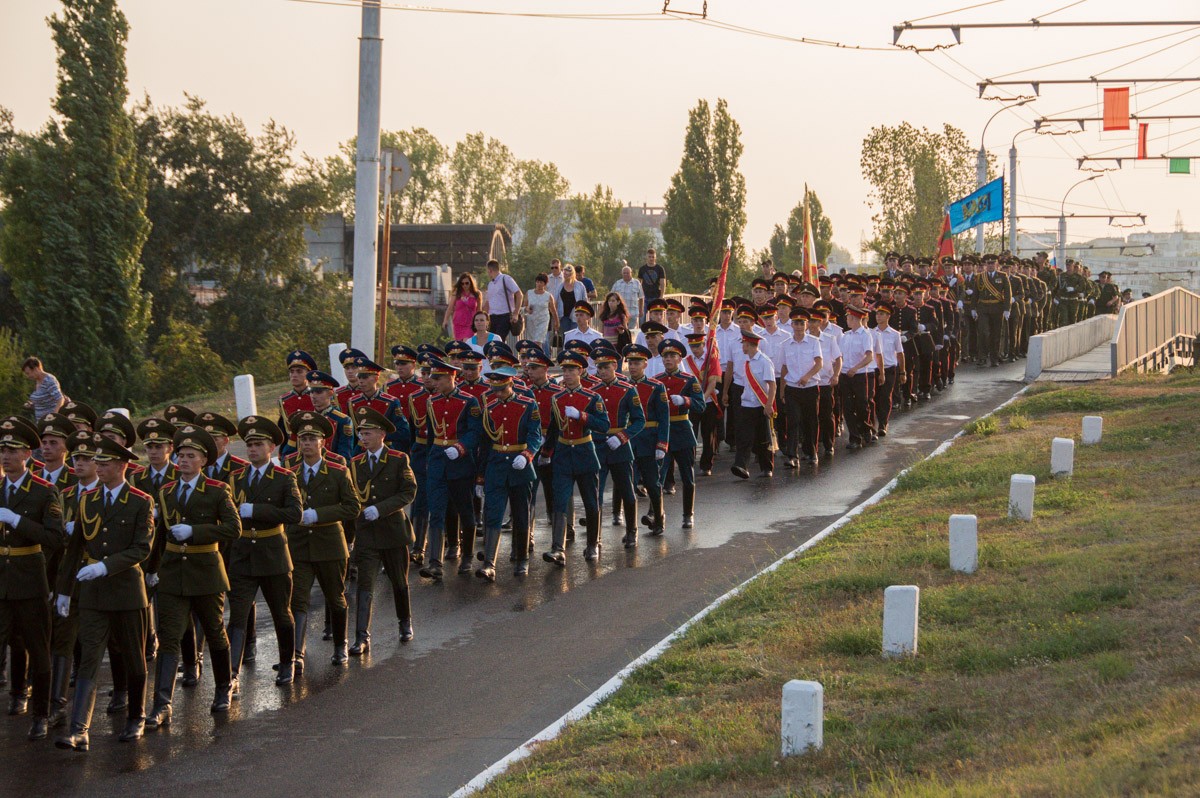 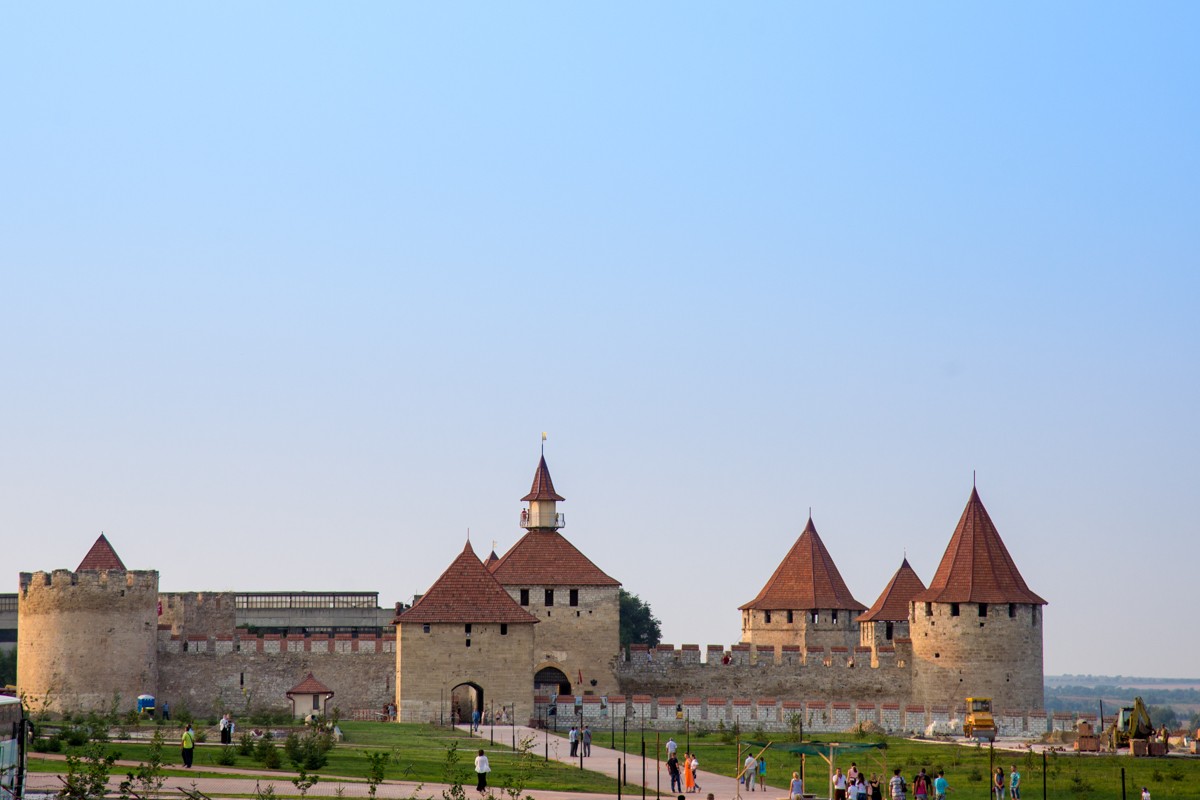 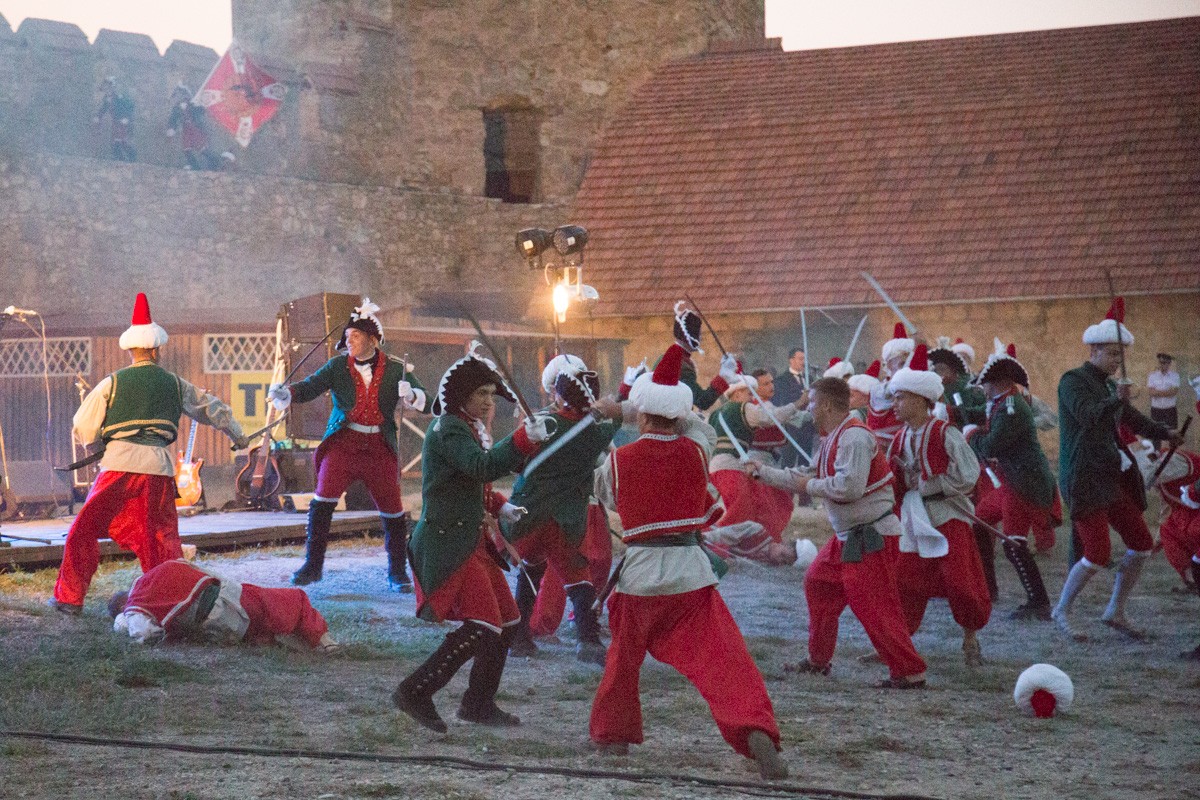 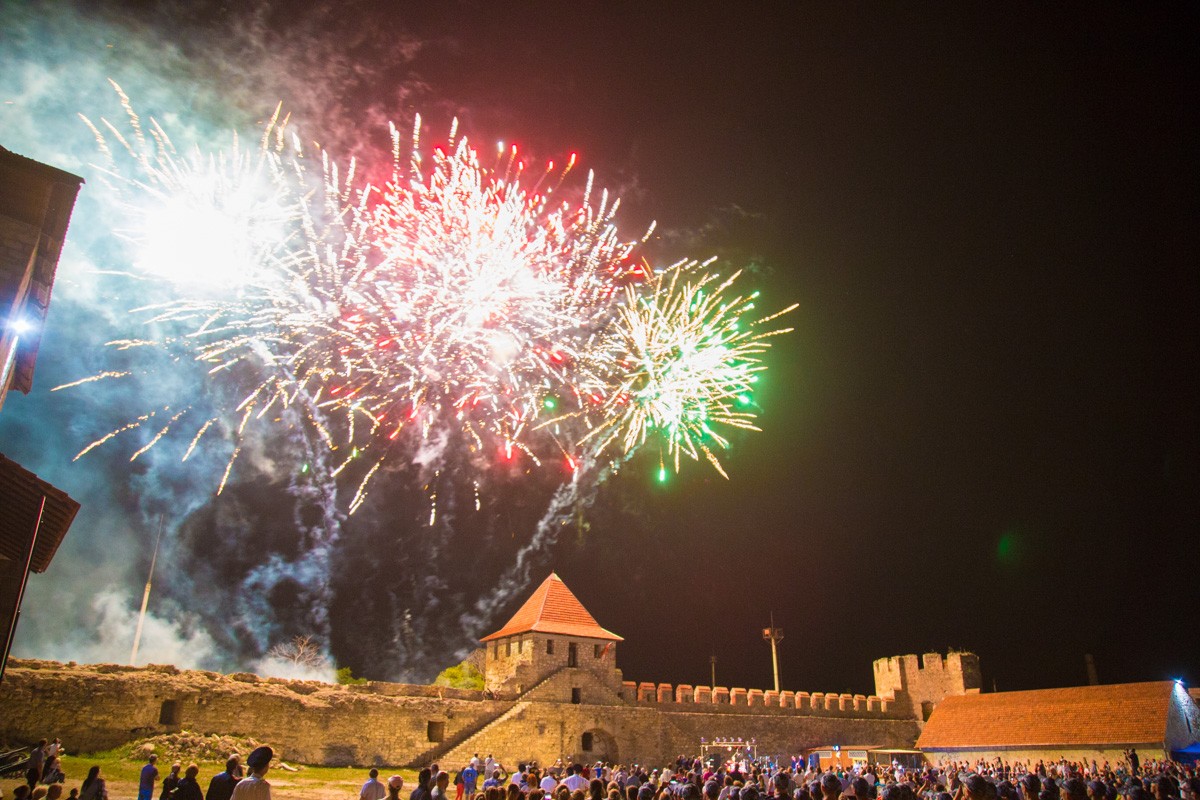